Katie and I have been staying in a modernized log cabin on the north shore of Samish Island since the beginning of September. High tide comes right up to the bulkhead that makes up the back “porch", and recedes past the mudflats during low tide until you can see the oyster beds and even the channel of the Samish River. During the first couple of months we got out and about more, but we have been mostly hibernating for the last few. Prior to hunting season, I took my kayak out into the bay on the south side of the island to visit the many critters in that area. More recently, when it isn’t raining and there is a chance for some nice light, I’ve spent most of my time out in the flats along the roads leading to the island. We did stop at Ridgefield NWR, north of Vancouver, WA, on our way home from visiting family for Thanksgiving.

Changing of the Guard

In the past, the majority of my time spent in the Samish / Skagit Flats area of NW Washington State has been during the winter months. This is the first fall that I have spent an extended period of time here and it has been fun to watch the wildlife change from summer residents to fall migrants and then to winter residents.

We arrived at our rented cabin on Samish Island at the beginning of September during a salmon run. The fishermen were abundant and so were the seals. Migrating flocks of western sandpipers and black-bellied plovers (without their black bellies) were taking advantage of the mudflats, along with small groups of greater yellowlegs, long-billed dowitchers, and pectoral sandpipers. A few raptors such as Cooper’s and sharp-shinned hawks, American kestrels, and a peregrine falcon, as well as the ever-present red-tailed hawks and northern harriers, were active. Large congregations of great blue heron—many young from nearby rookeries—hunted either on the mud flats or in grassy fields. A flock of Caspian terns fished around Samish Bay, roosting on a small island at high tide. The fields collected savannah sparrows and meadowlarks, while surrounding shrubs housed song and white-crowned sparrows. Young Anna’s hummingbirds staked out the shrubbery patches. Out on the water a common loon family fished, and white-winged and surf scoters dove further out. The lone red-necked grebe would make an appearance now and then and there were always double-crested cormorants to entertain us. Towards the latter part of September, I spotted my first short-eared owl of the season, a surprising sight so early in the fall.

The beginning of October saw many changes as all the duck species began to arrive. This would eventually be followed by humans in fall plumage peering at them in anticipation of the upcoming feeding frenzy. I found my first northern shrike of the season (a youngster) in early October, and later an adult. Snow geese were also arriving. October 20th marked the official beginning of hunting, and the ecology adjusted again to the new predators. Bald eagles increased in numbers around the same time; it is hard to know whether they time their arrival merely to the influx of ducks or to the increase in injured ducks as easy prey. By the end of October large flocks of snow geese natter about in shifting patches on the fields, or hysterically cackle in airborne flurries after an eagle has flown over. The honking of swans can be heard in the distance and their white figures speckle some of the muddier fields. Bufflehead, one of our smallest ducks, begin arriving and are one of the few species I see regularly on the water next to our house. Short-eared owls are now a common sight, mothing over grass fields in the late afternoon. 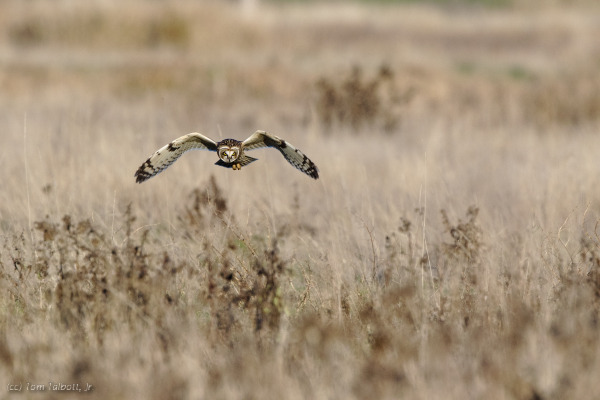 We don’t hear coyotes where we are staying, but I did get a nice look at a healthy one as I sat in one of the hunting areas on the morning of All Hallows Eve.

In November, the bald eagle population continues to increase, with over a dozen of them perched in a single tree. A number of ducks—mostly American widgeons, northern pintails, and buffleheads—find sanctuary in the pond on the church camp property on Samish Island, realizing that the numerous dog walkers (and dogs) aren’t nearly as much of a threat as those with fire sticks in the fields off the island. Rough-legged hawks start appearing on the power poles or tallish trees in the middle of fields, and short-eared owls are now regulars, competing with northern harriers and other hawks for the voles that sneak about in the fields. Occasionally I see a merlin. Out on the water, brant bob in the distance along with the rafts of ducks. Snow geese congregate on the east side of the bay in the evenings depending on the tides. A few times we have enjoyed watching a large flock of red-breasted mergansers chase a school of fish around the bay right from our living room windows.

The winter residents have mostly found their rhythm by the end of November. The hope for an irruption of snowy owls is fading even though it is still early. But the sheer numbers of birds moving from bay to field, field to field, and field to bay is a delight: I am looking forward to hanging out for the next few months with the many winter denizens of this area.
<< Winter 2020
Summer 2019 >>