Winter was very mild this year in the Pacific Northwest. It actually felt like spring started in late January. Early on, I had the opportunity to spend time with one of my favorite winter birds, the short-eared owl, as well as a few other special winter owls that I don't get to see regularly. At the first hint of spring, I was fortunate to find an Anna's hummingbird nest and spent many hours watching nest building and nestling feeding. I was even able to find the newly-fledged youngster the day it left the nest.
"Short-eared owls?"
I can recall a few events that opened me to seeing the world differently. Buying my first telescope turned my eyes skyward instead of looking at the ground. Identifying my first uncommon bird in my yard (western tanager) revealed the myriad critters that frequent the space. Learning the song of the ruby-crowned kinglet made me wonder, "how is it possible that I've never heard this before?"
Even as I became aware of birds and other critters that were around me, owls always seemed to be mysterious nocturnal dwellers that were out of my reach except for the rare hoot at night or sighting in my headlights driving down a dark country road. I will always recall my puzzlement when Katie and I arrived at a birding spot in the Skagit Flats in Washington State and met a photographer coming out with an excited look on his face. "Did you come to see the short-eared owls?" I had no idea what he was talking about. There weren't any trees around and owls still seemed unlikely targets for my fledgeling camera skills. And, in fact, we saw no owls that day. It wasn't even conceivable. It was mid-afternoon! Sorry, not on the radar.
Then the snowy owls came down from the north, an event that generally happens every seven or eight years. Spectacular owls that sit on driftwood in the middle of the day! Their previous visit was the winter before I bought my first camera and I had a fuzzy look at a distant one at the Nisqually National Wildlife Refuge. This time, they migrated in greater numbers and I was deeper into photography. Even still, I'm not a rare bird chaser, but eventually the general excitement about these owls got under my skin. At the same time, I started hearing about short-eared owls and even long-eared owls in the same areas that snowies were being sighted, but I generally discounted them as critters hidden in the shadows that my poor camera would never be able to capture. 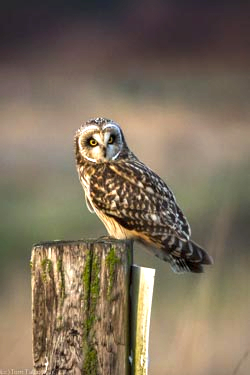 One day, Katie and I decided to visit one of these areas to see if we could get a distant glimpse at a snowy.  There were a number of cars in the parking lot, so we assumed we were at the right place. It was mid-afternoon and I was fiddling with something, maybe looking for the parking permit for the area, when Katie made an exclamation and made me look at a post in the field. Sitting on the post was a medium sized brownish bird that was clearly not a hawk. I was seeing my first short-eared owl, wide awake, alertly scanning the field for movement. It eventually launched into the air and flapped around like a big moth, looking / listening for any movement in the grasses. Clearly, this was an unusual sighting. How cool is that? I headed out to see if I could find the snowies, since that was the reason I had driven up there. My recollection is that Katie stayed in the parking lot. I was directed to an area where some people had seen a snowie off in the distance, across the slough, but I don't believe I actually saw one. What I do remember is as I walked along the trail I saw short-eared owls (more than one) flying along the path at eye level, hunting in the middle of the day. When I got back to the parking lot, Katie told me about just sitting there watching the short-ears flying around her and out in the field.
"How did I not know about this?!?!"
Owls aren't supposed to be out in the middle of the day! Okay, snowies are special because they are used to spending summers up in the northern tundra where the sun doesn't set and there aren't many trees. It makes sense that they have different habits.  But how is it that there are these other owls that regularly show up, an hour's drive from my house, and hunt out in the daylight, and I had completely filtered out all news of them from my life? Their numbers do fluctuate from year to year, likely a cycle similar in style to the snowie cycle, and that year was a particularly heavy one, but still… Another filter was lifted from my eyes and now I was seeing the world differently… again...
It has been a few years since my eyes were opened to this phenomenon, but I was still in awe while spending time this winter with short-eared owls flying around me, sometimes flying so close I felt like I could almost reach out and touch them. This was another big year with larger numbers than usual. Also, whatever circumstances led to the rise in numbers likely contributed to the fact that a pair of long-eared owls also were in the area. These owls are a bit more traditional and sleep during the day, coming out right as the sun dips behind the hills. This uncommon owl attracted many more people, mostly photographers, which made the scene a bit less tranquil than normal. And, unfortunately, resulted in some unseemly behavior by the human hordes (like flushing the long-ears from their daytime roost trying to get a cooler picture). Even so, the hunting prospects were apparently good enough in the area, that they put up with all of our lenses and stuck around through February.
Owls are still a bit mysterious to me. I am now aware of phenomena like the short-ears up north of us or the pair of nesting great-horned owls at the Nisqually NWR, and even a hunting northern pygmy owl, but outside of these widely publicized locations I only occasionally stumble across a barred or barn owl, or even a great-horned owl, at Discovery Park or similar location. I feel there is another opportunity here to lift another filter from my eyes.

In Memory of Mary Cutler 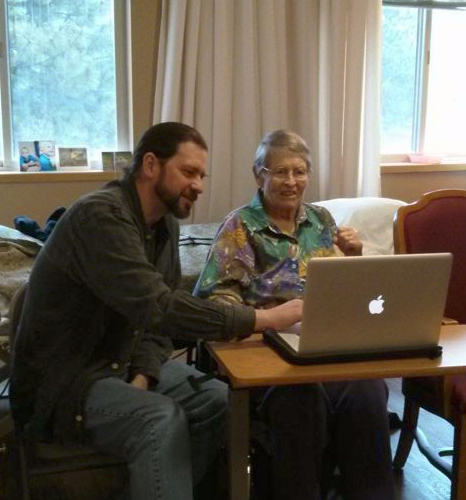 My mother-in-law passed away on March 17, 2015. Her love of nature, that she passed on through her daughter, was a direct influence in me opening my eyes to the world around me and deciding to learn how to capture it with a camera. If my wife, Katie, had not adopted that same love, these pictures would not exist and I would be a very different person.

I am so thankful that I had the opportunity to share most of the images for this album with Mary the weekend before she passed. I specifically remember her reaction to the pygmy nuthatch picture that was taken on her property. I could see that old light of delight in her eyes. Being able to give back to her what she passed on to me was always a blessing.  I will truly miss being able to do that in the future, but will always be thankful for what she gave.