Katie and I spent the majority of the summer in Nine Mile Falls, WA on the farm she grew up on. It was a good place to hang out and not try to compete for camping sites during the peak of camping season. Katie had the opportunity to spend time with her father and help her niece Rachel with her Community Supported Agriculture (CSA) garden. I spent my free time following all of the new life that uses the farm during the summer to grow up and get ready for fall and winter. The farm had some good usual critters and some surprising ones as well. I also spent some time at the coast for a week, but it failed as an attempt to escape the smoke of August that has become a mainstay of the Northwest, and the wildlife wasn’t very prevalent.

As of September 6, 2018, Katie and I have been out of our house for two years. We have been in our trailer for a majority of that time. It is hard to believe, and our current plans seem to say that we will be in it for a while longer as we have begun another slow journey south.

A Summer on the Farm 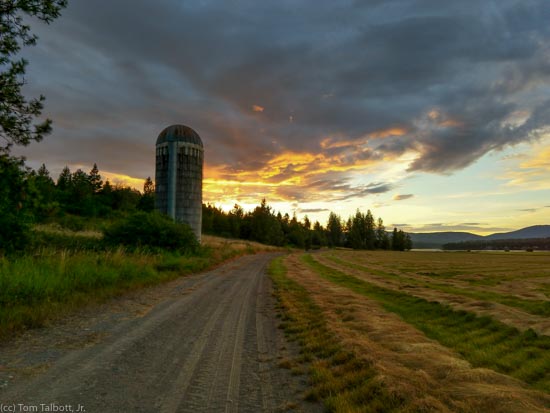 One of the features of the farm that Katie grew up on that I am fond of is the number of wildlife species that it supports. Outside of the multitude of Canada geese and white-tailed deer that use the fields throughout the year, the surrounding woods attract numerous birds and mammals.

Katie developed a strong bond with that land, both through her mother's example and her own exploration. She eventually passed that appreciation on to me. Just over a dozen years ago, I purchased a small telescope and a camera to attach to it and started exploring it for myself. The farm became a whole new place and over that time it has become a bit of a sanctuary where I could go out and really be with the life that was there. It was photographing cedar waxwings eating berries on the farm that inspired me to leave a job that I had lost all motivation for and dive deeper into the natural world.

Coyotes have been around since the beginning of the thirty-plus years I have been visiting the farm. My memory is that there used to be a roaming pack that would occasionally serenade us at night, but I rarely hear that anymore. While coyotes are welcomed on the farm, there are a number of neighbors who view them only as vermin, and miss the problems they themselves create by resorting to the short-sighted approach of eliminating anything that they perceive as threatening to their world.

For a number of years, though, at least one female coyote has been raising her young on the farm. My brother-in-law Kit would report sightings of coyote pups playing among the irrigation pipe piles as he drove by in the morning. I was always jealous, because I never seemed to get a chance to see them. Katie's brother Rob recalls the sea of ground squirrels that used to be seen washing back and forth between the fields and the woods a couple of decades ago. Since coyote pups started showing up in that area, you hardly see any.

Finally, on a summer morning in 2013, while photographing a yellow warbler nest, I looked over my shoulder and saw coyote pups sunning themselves on a rock pile. I was standing in shadows undetected and was able to observe the family as they relaxed and played. It was definitely a "Wild Kingdom" moment.

Since then, I have had the opportunity to locate and photograph her litters a few times, including this year. Since our plans were to spend a good portion of the summer on the farm, I had high hopes that there would be a new litter this year. Sure enough, on my first foray into the woods I found myself being growled at from a hidden location near where there had been a den in the past. I backed off and circumvented the area. That evening, I decided to approach from the opposite direction to see if I could overlook the area and see who was there, when I practically stumbled upon the pups. I backed off a ways and was able to watch them from a distance, but didn't see any sign of the mother. 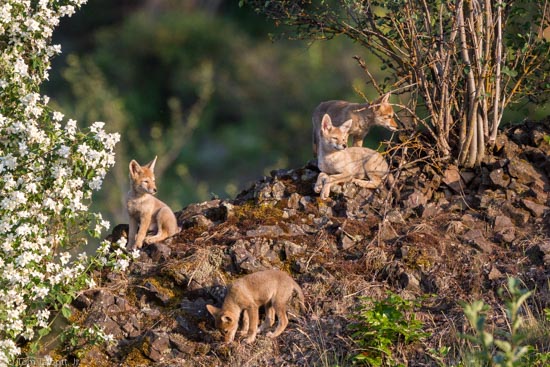 I continued to find the pups in and around that same area over the next few weeks, but never saw momma. Finally, as I was observing a couple of pups in the pipe pile, I saw momma prowling along the rock face above it.

Unfortunately, that was when I started only seeing two pups at a time.

As the summer progressed, I would run into the family occasionally on my walks through the woods. Once harvest was in full swing and the field mice were uncovered in the grass fields, we started seeing momma out mousing in the evenings. Eventually, she decided to move her family across the farm to a more secluded area referred to as "The Island” near the lake. It seemed like a good move since a lot of harvest activity happens near the pipe pile area, something she was likely familiar with over the years. Not too long after that, though, Rob saw that one of the pups was dead in the grass field he was harvesting. It looked like it had crawled into a windrow and curled up before it died. He didn’t check to see what had killed it and the vultures and eagles did their job taking care of the body. Seeing how hard it is to raise a litter in such a hostile area, I’m amazed at how wily momma must be to have been able to survive all these years.

Around that time, I woke up to the sounds of upset deer near the trailer. They were huffing and puffing and stamping their feet. I looked out the window to see something slinking away above the garden and a doe chasing after it. I got my gear together and went out into the woods to see if I could find out what was going on. That's when I heard the barking coming from the direction of one of the grass fields. It went on and on and was very unusual. I followed the sound through the woods expecting to find a neighbor dog harassing the pups, but found a coyote pup standing in the middle of the field doing the barking. Once it saw me, it stopped and ran off into the woods. 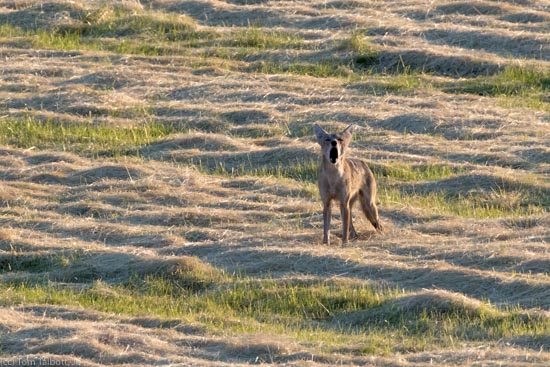 That evening I went out again and once again I heard barking up near the house on my way back. I didn’t find anyone, but it sure was curious. The following morning I heard barking again and found the coyote pup back in the grass field, clearly agitated.

The evening of Day Two of the "Mystery of the Barking Coyote" revealed the likely answer. It was late dusk and I was about to exit the basement after taking a shower, when I could hear the wild turkey flock percolating very loudly down the hill. I stuck my head out the door quietly, thinking the coyotes were probably nearby. I looked to my left and saw some kind of cat slink into the bushes. Due to the twilight, I had a hard time telling the size, but it looked like the size of a bobcat with the shape and coloring of a mountain lion. It disappeared quickly, so I went back to our trailer. But the turkeys were still percolating, and then the coyote started barking. I grabbed my camera and set it to low light settings, and walked back around the house. Looking to the left, I saw four eyes staring at me: 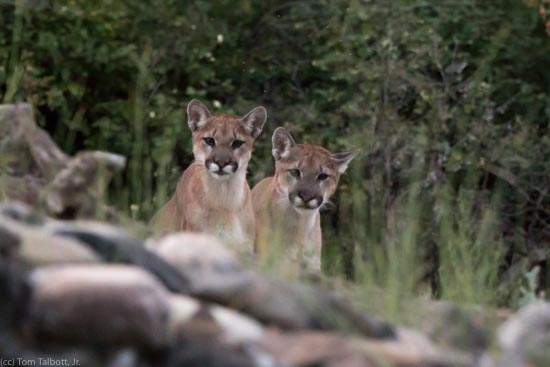 Two young mountain lions were looking at me from the other side of the yard. I now knew what the coyote was upset about. I took a few pictures and decided to head back to the trailer knowing that if there are two young cats here, there is probably a momma around as well.

A few weeks later Katie saw a moose crossing the farm. When we got back from our quick trip west of the mountains we both got to see a moose down by the water, possibly the same one. Add that to the mink, badger, five-foot bull snake, momma and baby porcupine, etc…

Our primary reason for staying on the farm this past summer was so that Katie could spend time with her father. For me, it was a great opportunity to pay attention to all of the "wild" life that uses the farm, and being in the trailer allowed us to be that much closer to it all. We enjoyed our time very much, but we also confirmed that it isn’t our home long-term. We own property next to the farm, but I have never really bonded with it. When Katie’s mother passed away, I knew that one of my ties to the land had been broken and that I would soon need to find a new sanctuary. And while there was sometimes a wonder, especially for Katie, as to whether we might be overlooking something on the farm, this summer confirmed that we are on a different path.