We just completed a full year of reverse snow birding: fall and winter in northwest Washington, spring and summer in southeast Arizona. By subjecting ourselves to this unconventional pattern, we found ourselves experiencing a plethora of wildlife and aliveness we would have missed otherwise. Fall and winter birds in the Skagit valley along with snow and north winds blowing high tides crashing up onto the cabin we stayed in, spring migration and summer monsoon life that emerges when the rains come to Southeast Arizona as well as spectacular lightning storms and some crazy downpours and flooding. Experiencing the chorus of spadefoot toads after the first flooding is quite magical as is driving around Sonoran desert toads that look like lumps of clay in the road. Seeing our first wild desert tortoise was a treat along with the four others we eventually saw. Monsoon brings out all kinds of life during the summer and some of it is not of the cute and cuddly kind. Just a word of warning as you peruse the pictures in the album. 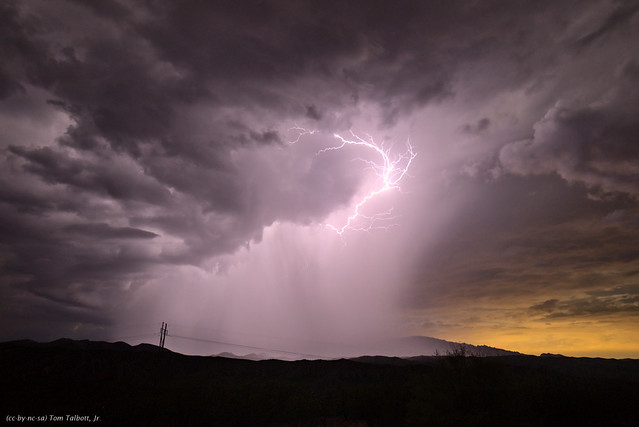 It has been our goal to experience all of the seasons (locals claim five of them) in Cascabel, AZ. Summer (May and June), Monsoon (July, August, mid-September) and Fall (mid-September to mid-December) were still on our TODO list as of this year. We have been here since the end of March and have now completed our first Summer/Monsoon season.

This monsoon did not resemble the stories that we had heard, and has been referred to as another “non-soon” due to the low total precipitation and high heat. In fact, Tucson, the nearest big city, recorded July and August as the hottest two months on record. Even though you can’t predict the future, trends are not looking good for the old monsoon weather returning on a regular basis or for the 20-year drought to end anytime soon.

Yet we are very glad we stayed and had the chance to experience this time of year. The storms were infrequent, but intense. When we did get rain, we would get an inch-and-a-half to two inches in an hour. The lightning shows that accompanied these storms were captivating when they weren’t terrifying. Sometimes, the river would run though we never saw the storm that generated the torrents of water. After the rains, millipedes would suddenly be present everywhere, toads would emerge from the ground and fill the evening with song, and the occasional desert tortoise could be found mowing down whatever greenery it could find. Male tarantulas wander around in the evening seeking a mate, which means many types of tarantula hawks (large wasp-like insects that paralyze tarantulas and use them as a breeding ground) are out as well.

During monsoon, a second greening of the desert occurs. Late February thru April brings the first greening with the hope for a super bloom of desert flowers. May and June turns much of the grasses and low scrub into brown, stickery, snake-hiding places that line your socks with painful reminders of their existence. When the rains do come, much of that is washed away and grasses green-up the landscape again. There are even some new blooms along the river at the end of August and beginning of September.

Towards the end of the season, migrating birds appear along the river foliage as they follow the pools left by the rains southwards towards their fall and wintering grounds.

We learned about the fruit of some of the cactus in the area. The brief period of fruiting of the saguaro cactus provides a delicious treat if you are willing to construct a tool and have someone catch the ripe fruit as you pry it off the tops of those towering icons of the desert. More importantly, the fruiting attracts many birds and seems to be timed for when many are about to fledge from nests. Gila woodpeckers, brown-crested flycatchers, and many more gather the fruity pulp and try to coax their nestlings out into the open with the sweet treat.

Then the prickly pear cactus fruit starts to ripen. We learned the technique of burning off the fine hairs and peeling the fruit so that we could add it to a daily fruit salad. I also got pretty good at extracting the hairs out of my fingertips when I didn’t get all of them burned off. We left the hard seeds and skins out in the yard and they would be gone by the next day. The local javelina herd would come through occasionally and partake of any low hanging fruit or any that had fallen to the ground. Watching them chew right through one of those fruit with fine prickly hairs and hard little seeds made us wonder what the inside of their mouths are made of.

In order to manage the heat, we housesat for a couple that lives in Alaska during the summer. The house is perched up on a ridge and has a 360 degree view of the valley and mountains and we were able to keep it at a nice 85 degrees Fahrenheit when it was around 110 outside. When one of the first lightning storms came through in late June, it started the Bighorn fire on Mt. Lemmon. It was early in the season with lots of dry fuel for it to burn. It started on the west side and eventually spread over most of the mountain and down towards the northern part of the valley. While it was unlikely that it would spread into Cascabel, we had a good view of it. The length of time that it burned and the smoke it generated made for an anxious time, but it was only a warning shot for what was to happen to the rest of the western states during the summer.

Our goal is to stay in Cascabel into next spring and see what the world holds for us then. Staying flexible seems to be the best bet for our current times.
<< Fall 2020
Spring 2020 >>