Winter in the Middle San Pedro Valley is a time of heightened domestic life (cattle, goats, and humans) and of muted wild life. Especially this year. Last winter we had a huge flock of sparrows that filled the valley floor, as well as many deer. This winter we saw very few sparrows and the deer were far less visible. Last winter was ridiculously dry preceded by a very dry monsoon and it is my assumption that the only food was near the river. This winter we have had more rain and the previous monsoon was very wet (though we are still considered to be in a 20+ year mega-drought). Perhaps there was more food dispersed throughout the land so that there was no need to concentrate so heavily this year, but the overall numbers sure seemed low. Whatever the reasons, the combination of lots of domestic life activity and low wild life activity meant less photography for me this winter. Even so, we did have a light adult ferruginous hawk hanging around that we dubbed "Ghost Hawk" and a few more overwintering vermilion flycatchers than normal.

When You Love The Land...

This post is partially inspired by a recent episode of Desert Oracle Radio (see below) and I felt like I could hear Ken Layne's voice in the background as I wrote it. 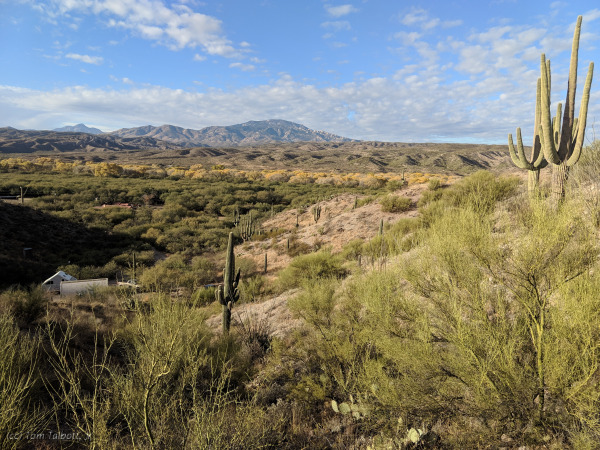 Standing along the Middle San Pedro River as winter fades into spring, listening to the woods wake up from its months-long slumber, there is a feeling of excitement mixed with dread, even despair. One of the things you have to deal with when you fall in love with such a land is that it is always under threat.

The middle and lower San Pedro Valley is part of one of the largest unfragmented wildland areas in Arizona. Unfragmented wildlands are a crucial piece of the puzzle for maintaining healthy wildlife populations, and subsequently, a healthy world for us. Yet, this area seems to be viewed from the outside as an untapped resource that needs to be exploited, even though it has been used as mitigation for other large projects deemed necessary for our modern society.

Decades ago, Pima County wanted to pump water out of the San Pedro Valley, over the mountains, to water the gardens of Tucson. It took court action and a ruling that they weren't allowed to pump from a different watershed to stop that action. Standing under the newly greening cottonwoods next to the currently dry river bottom, it is frightening to me to imagine what it would look like here if that had been allowed to occur.

Then there was the attempt to run an I-10 bypass of Tucson through the valley. Maybe it was so Phoenix residents could visit Tombstone easier, but I'm sure truckers would have found it useful.

There was also the time when a local militia wanted to set up a firing range up Hot Springs Canyon, a tributary of the San Pedro River, creating lots of traffic along Cascabel Rd and Canyon Rd, further fragmenting the land, not to mention the disruption of peace that is a hallmark of the area.

These are only some of the most recent threats that were eventually thwarted because there were people in the area that recognized the value of the land as it is and just how precious such a place is, especially now.  It took a community of people dedicated to what the land is, not to how it could be exploited, along with partnerships with folks outside the valley to preserve this land's right to exist and be more than just a commodity.

Unfortunately, the valley is still under threat and the community that has done such a good job of caring for it is also under threat. A towering high voltage transmission line, known as SunZia, is slated to be plowed through the valley. Its stated goal is to bring green, renewable energy from New Mexico to California. How can you oppose such admirable goals? After all, it is for the greater good, right?

Yet, the "green-ness" of this project is quite questionable to me. The parent company, MMR Group, is heavily into oil and gas and it is hard not to look at this project as a way to diversify its portfolio and tap into the vast amount of financing being slated towards "green" projects. Also, to facilitate the construction and maintenance of these massive towers, over 700 miles of new roads would be bulldozed through previously unfragmented lands. The irony that it would severely affect a community in which many folk are doing their best to be conscious of their own resource usage -- some completely off grid with small electrical needs and solar systems to match -- seems to be missed. Then there is all the resources that would be used to build out this transmission line as well as the huge loss of energy over such great distance, thus requiring larger wind and solar farms to make up for it. Smaller, distributed, and localized power generation is far more efficient and "green" and this endeavor will ultimately make little headway in dealing with the crisis ahead. Yes, New Mexico has lots of wind, but California has lots of sun.  For me, the idea that this is a "green" project is in name only, but makes it virtually impossible to fight.

And why run these lines through this valley and not through existing utility corridors? Because the folks behind the project are very savvy. They have the experience of running pipeline projects and know how to work the permitting system while pitting neighbor against neighbor. Not only fragmenting the land, but fragmenting any potential opposition as well. (See: Trespassing Across America. An account of walking the Keystone XL and learning how those running that project pitted neighbor against neighbor.) This valley is seen as the path of least resistance, with the least amount of money to oppose the project. Spreadsheets dictate that this is the place for their project. The reality of its impact is not part of the equation.

And that reality is despair inducing. An option on a large piece of property across the river from the community center has been purchased, likely to be used as a staging area for construction and ongoing maintenance. If this goes through, a valley currently free of industrialization would be changed forever. Helicopters would fly materials from the property up to the construction sites and Cascabel Road would have a level of activity not seen since the current version was developed. Much of this would subside after the initial construction, but a precedent would have been set, a new utility corridor would exist, and further fragmentation would continue.

There is an attempt to make it seem like this project is a done deal, especially outside the valley. It is hard to get others to see that we have taken enough from these lands already. Supporting resource intensive mega projects is not the way forward. It is time to give back. Time to give the land back to the land.

The fight against this project has been going on since 2009 and has already created many fragments in the community up and down the valley. Those fragments are intentional, not just a byproduct. But this community is unlike any I've ever been a part of and I believe that we have an opportunity to make it stronger, even if we lose the fight against this incursion. If we completely give up, then we will truly have failed the land.

As an Antidote to Despair, I walk the dry river bottom listening to the returning life sounds in the trees (vermilion flycatchers, yellow warblers, Bell's vireo, ash-throated flycatchers, Bewick's wrens, ruby-crowned kinglets, northern beardless tyrannulet, lesser goldfinch, ...), watching pipevine swallowtails flutter by, observing the white-tailed deer dashing off with their tails waving in the air, and pledge to continue to foster the community that cares for this land.

P.S. After writing this post, an article showed up in my news feed from NPR: Misinformation is derailing renewable energy projects across the United States. The term "misinformation" is used 16 times on the page. While the article does have some examples of what can be labeled as "misinformation" intentionally being used to oppose "green" projects, the article's real impact is to label opposition to "green" projects AS misinformation (see the title) and quash any form of critical thinking. This in itself is a form of misinformation and seems to be part of a campaign to delegitimize any opposition to projects labeled "green", even though a particular project may ultimately do more harm than good in the long run. The article ;also preserves the status quo of putting the burden of change on others (including the land and its native life) while not taking responsibility for our actual impact. This is the cost of modern life, and as long as we don't feel the cost directly, we don't feel the need to change ourselves. But that is a topic for another day.

P.P.S. If you find any misinformation (not merely disagreements) in any of the websites associated with opposition to the SunZia project, please pass it along. The folks opposed to this project are legitimate, critical-thinking people, but mistakes are made and I believe any actual misinformation will be taken down.
<< Spring 2022
Fall 2021 >>