Summer was dedicated to clearing out the house that Katie and I have lived in for 21 years. This included recycling, selling, giving away, and throwing away lots of stuff that has cluttered our lives for many years. Everything else had to fit in our truck and trailer or be stored somewhere. We also had a lot of work done on the house so that it would be rentable. Given all of that, not a lot of time was left for photography.  Even so, I was able to find some nice shots.

Katie and I are now out of our house and on the road. So far, all the planning and preparation has made for a pretty seamless transition into a new way of life. It is still a challenge, and we are learning every day, but there are no regrets so far. 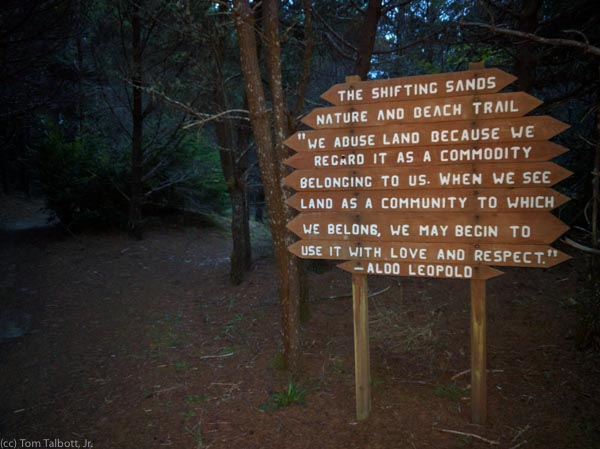 One of the things I am constantly faced with when I am "outdoors" is our skewed relationship with the land, whether as individuals or as society. I know my relationship is skewed by having lived a good portion of my life in suburban or urban areas. So, it was refreshing to see a simple statement on a sign that captures a subtle, but significant, restatement of how it could be different.

What is interesting to me is that Aldo Leopold is credited for changes in wildlife management that supposedly are in practice today.  Yet, it seems that his vision still hasn’t come to fruition.  While there has been a shift in thought, what he expresses in that short statement requires a much bigger paradigm shift than has occurred so far. Such a paradigm shift seems all the more important with the continued polarization of views expressed in such incidents as the Malhuer National Wildlife Refuge Occupation and the trials resulting from it.

When we view land as a commodity, then we tend to find ourselves either on the "resource use" or the "resource preservation" side of the problem. Another division is between those living off the land and those who use it primarily for recreation, with some obvious overlap. Government agencies are tasked with managing the balance of these sides in public lands, wildlife areas, and refuges.

This time of year, a division within the recreational use of land is obvious: between hunting and observing. Government agencies have different terms for these groups: 'consumptive' and 'non-consumptive' users. Most 'Consumptive' uses require licenses and fees and generate revenue for these agencies, therefore most of the effort is put towards preserving the stock, or even raising stock, for future seasons. Therefore, land is generally allocated in a way that tries to fit this need.

But what would "land as community” actually mean? This is not a question I know how to answer, but it is the question that will be on my mind as Katie and I travel around the western United States for the next year.

What I do know is that it is not about taking the most we can from the land, nor is it turning everything left into a big natural preservation area. It is also not just seeing wilderness as a big recreational playground. It is about living with the land in a way that respects it and loves it and includes all uses of it by us and all the other life that relies on it. It requires a much broader vision than any of the various sides are currently willing to entertain and it requires everyone to rethink their relationship to land.