Blessings to you during this holiday season.

Katie and I have now been on the road for a little more than one season. While we were not specific about our plans and wanted to be open to go where we were led, we certainly didn’t follow the route we had anticipated. After working our way down the Washington coast and stopping in the Willamette Valley for a spell, instead of heading further south we were blown (swept) eastward by the incessant atmospheric river of rain that was pouring into the Northwest. We found ourselves heading over the Santiam pass, through Sisters, Oregon, and down into southeast Oregon and the Malheur National Wildlife Refuge. We then headed towards Boise, Idaho to see friends and get our truck its first service. From there, we meandered south through Utah before scooting out in front of the first major snow storm.  Eventually, we left the freezing weather by fleeing through southern Nevada and into western Arizona with all of the snowbirds. So far, we’ve experienced Cape Disappointment, the Columbia River, the Willamette Valley, the Cascades, Steens Mountain, the Snake River, the Great Salt Lake, Zion National Park, the Valley of Fire, and Lake Havasu, to name a few.

So far, I wouldn’t change a thing. 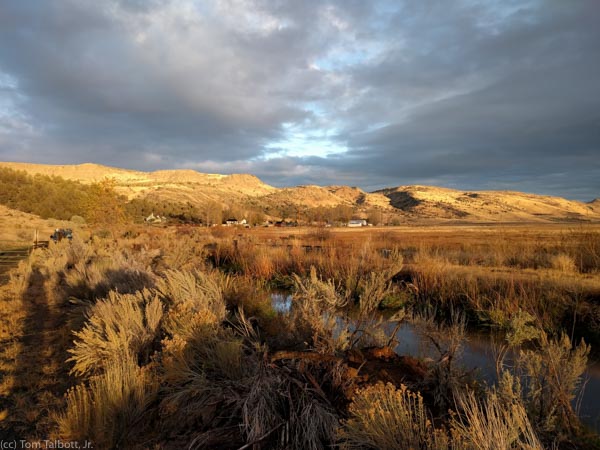 The first part of our trip seemed to be more about people than wildlife. The winds blew us into Harney County, Oregon right as the Malheur Occupation trial came to a close. The deep divide that gripped the country was more than evident as we travelled through and engaged with the local people. Never did we find anyone who wasn’t extremely welcoming, but the difference in perspective was almost overwhelming at first.

The evening after the verdict in the Malheur Occupation trial came down, we were sitting around a campfire with Harney Countly locals. There wasn’t any big celebration, mostly shock. The phrase that I remember was “this isn’t over yet.” We stayed a week at the Page Springs Campground during the end of October, beginning of November. During that time we heard many stories that emphasized the discontent with the status quo in that area. About 75 percent of the county is federal land. Much of that land is leased for ranching, at least land that is of any use. As the economy continues to shift away from resources and more towards technology, these areas continue to become more depressed. Rules that govern the majority of the land are made over 2500 miles away and appear to residents to have little regard for local conditions.

The folk we hung out with were all photographers that gather annually in the area for the mule deer rut. Everyone is looking forward to the big bucks coming out of the mountains. They also enjoy sightings of coyotes, bobcat, wild horses, and big horned sheep. They love the outdoors and they love being out in the wilderness. They will spend the whole month of November, through snow and ice storms or whatever nature will throw at them, because they love being there. And they want the federal government out of there.

One of the stories that seemed to capture the issue the best for me was how one of our new friends had put a trail camera on the refuge and ended up capturing someone poaching a deer for its antlers. His position on this kind of activity was, “If someone doesn’t have money and poaches a deer to feed his family, that is fine by me. But, if he kills a deer and cuts off his head and lets the rest rot, then I say, ‘hang ‘em!’” So, he takes the evidence to the federal enforcement officer that is in charge of the region.  The response he gets is, “I should fine you $390 for putting a camera up in the refuge!”  Even though the poacher is clearly identifiable, nothing apparently happens. The insinuation is that the poacher had ties to the local power structure.

So, the perception is that you have a federal officer that is unwilling to work with locals who care about the land and its wildlife, but seems to be swayed by those in power and intent on enforcing rules that make no sense. After many stories like this, the sentiment is expressed that the land needs to go back to the state.

Now, while I do not really agree with this sentiment, it became pretty clear to me that the status quo is not working and that is why Malheur was targeted for occupation by those that feel the situation needs to change. It is also not surprising to me that the tensions are this bad given how things are set up. I try to imagine who in their right mind would want to be this enforcement officer that is being vilified. This person is likely overworked and is in charge of enforcing rules created thousands of miles away over a large expanse of land, likely has a boss that is somewhat disconnected from the local situation, is constantly dealing with locals who push the rules because they don’t seem fair, and has generally become jaded. You can imagine that somewhere in the hierarchy, it became politically damaging to push for the indictment of the known poacher, thus tying his hands. Or, he has been bought out because he just doesn’t care anymore. It basically feels like an episode of “Firefly" to me. Government official acting in the name of big faceless government entity out of touch with local conditions only interested in keeping things in order.

As I reflect back on this, I am reminded of the quote that I found on the Washington coast, which is worth repeating:

The land in Harney County is regarded as a commodity and every side claims “it belongs to us!” I've heard this from the people who occupied the refuge as well as the people who were incensed by the occupation. It seems clear to me that merely shifting the ownership of this land to yet another government agency is not the answer.  I’ve heard the same complaints about state governments.

A new perspective will need to be created if there is to be real change here.  It isn’t a perspective that is being proposed by any of the current political parties or the anti-government entities. All of them are wrapped up within the “commodity paradigm”. What this new perspective would ultimately look like is still a mystery to me, but it must include a new concept of community and participation. I have seen hints of it in places like Cascabel, Arizona and I hope to learn more as we visit there and other new areas on our journey.

Reminder for the times:

Critical thinking is NOT the process of making critical statements about people we disagree with.
<< Winter 2016/2017
Summer 2016 >>