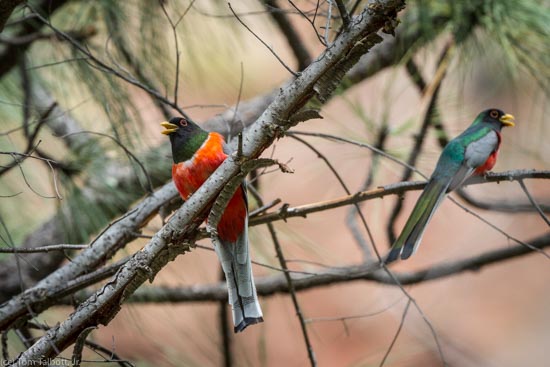 Katie and I spent most of this past spring in Southeast Arizona. I was determined to experience spring migration there since it is one of the major flyways for birds heading north for breeding and I had just missed it a couple of years prior. We also spent time in western New Mexico before we began our own migration north towards Spokane, WA.

We caught the beginnings of migration during our stay in Cascabel, AZ along the middle San Pedro River between the Rincon and Galiuro Mountains. We then stayed a week in Madera Canyon where we met a number of new species, including our first experience with the elegant trogon, a Central American bird whose northern range pushes up over the southern border of the US. We swung back eastward, revisiting Patagonia, AZ, exploring San Pedro Riparian National Conservation Area near Sierra Vista for a few days, and then landing in Cave Creek Canyon near Portal, AZ for a week.

We were unable to escape the allure of the elegant trogon, especially in Cave Creek Canyon. We were blessed with great views of them as they scanned for prey (bugs), a mesmerizingly slow panning of their head that has to be seen to fully visualize. We had the opportunity to watch a male trogon court a female into a potential nest hole, and found a boundary zone that two males were contesting (see above image). I felt we got to know them as more than just a tourist attraction.

As the temperatures began to climb, we continued to veer to the left, heading into New Mexico and eventually following the Rio Grande northward. We stayed near Bosque del Apache National Wildlife Refuge for a few days to catch some of the lingering birds that hadn’t left their wintering grounds.

At this point, we had stayed in 58 places in almost 9 months, school was getting out and campgrounds were filling up.  It was time to head back to familiar grounds and we set our bearing towards Spokane.

The Echoes of Aldo Leopold 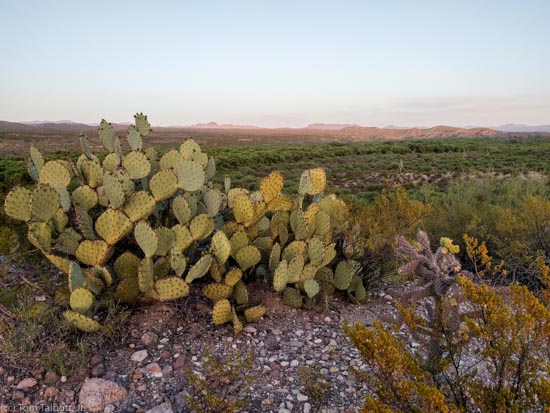 Almost 70 years ago, In 1948, Aldo Leopold died of a heart attack while fighting a wildfire at the age of 61, ending a special relationship between a unique individual and the land. Yet, the distant echoes of that relationship are still felt when you listen for them.

One of the inspirations for buying a travel trailer and hitting the road was seeking a new perspective on the land, its people, and our relationship to both. I wrote about the first echo I heard in my Summer Highlights 2016 newsletter in which I came across the following quote attributed to Aldo Leopold on a park sign:

As I wrote then, this simple quote embedded the concept of “land as a community” into my consciousness and ended up giving me a different lens for viewing the lands that we would travel through the next nine months.

For six months we meandered through Southeast Oregon, Southern Idaho, Utah, a bit of Nevada, the border of California and Arizona, Southeast California, and then into Southern Arizona.  We saw many lands, some utterly amazing and others that would make us sad. As I wrote in my Fall Highlights 2016, the current systems we have in place to protect lands still treat land as a commodity and not as community and thus create a tension that isn’t very healthy.

One of the few planned destinations for our journey was Cascabel, AZ. Two years prior, Katie happened upon a historic stone cabin in Cascabel, 60 miles from Tucson, Arizona, listed on AirB&B. It was in an area Katie had been reading about and it was on the San Pedro River which I was interested in visiting for its birds. Little did we know what would come from it. We spent a week there meeting a few of the local residents and enjoying the spring birds. We found that it was not your average community and realized that the few residents that we had a chance to get to know had a different relationship to the land than I was used to.

Katie kept in contact with some of the folk we got to know and had arranged to do some volunteering with the Sweetwater Center that is involved in conservation and agriculture in Cascabel.  When we finally arrived in the Tucson area in February, we met with Tom Orum and Nancy Ferguson, two of the Sweetwater Center board members, to get introduced and talk about our stay. They gave us the history of the Sweetwater Center and the Saguaro Juniper Corporation, a group of over 60 associates holding both deeded land and land leased from the State of Arizona. I talked a bit about what had inspired our trip as well as the inspiration I had taken from the quote above… and another echo was heard. I learned that the Saguaro Juniper Covenant that members subscribe to was heavily influenced by the writings of Aldo Leopold. The preamble clearly shows this influence:

In acquiring private governance of land, we agree to cherish its earth, waters, plants, and animals in a way that promotes the health, stability, and diversity of the whole community. This entails attentive stillness to meet and know the land as an active presence. It entails study, observation, shared reflection, and cumulative corporate experience to increase and bequeath our understanding of ecosystem health, stability, and diversity. It entails symbiotic naturalization into the land community - a communion of actual nurture and shelter. As elaborated by these entailments, fully accountable governance - stewardship - is the distinctively human way of bonding into one society with all who share in the land's life, which is the foundation for instituting a biocentric ethic among humankind.

We also learned about Jim Corbett, a founding member of Saguaro Juniper. While Jim’s fame is mostly being a cofounder of the Sanctuary Movement, it was his love of the land as an active participant that clearly inspires what is happening in Cascabel and can be heard in this quote from the Saguaro Juniper website:

Thus we do not seek to isolate wildlands from all human contact, rather we hope to include human beings as partners embracing the land, its plants and animals.

We arranged to arrive in Cascabel the first of March for a one month stay. We ended up spending seven weeks listening, learning, exploring and participating in a very unique community that will likely be a part of us for a long time. It is the first community we found on our trip that is truly exploring this “new" paradigm of how to relate to the land.

In mid-April we bade goodbye to the residents of Cascabel and attempted to escape its gravitational pull by swinging around more of Southeast Arizona to launch us back northward.  One of the lessons that we took with us is that a way of measuring the health of a land is by measuring its biodiversity.  After staying in Cascabel, it was even more apparent where the land was thriving and where it wasn't. Much of the land has been sterilized through the utility of paving, development, overgrazing, mining, large monocrop farming, and unrestricted “recreation" under the paradigm of "land as commodity". Given that paradigm, lands with the best chance of being healthy were those that were not suitable for the above or had been reclaimed from such endeavors.

But the echoes kept coming. After spending a wonderful week in Cave Creek Canyon near Portal, AZ, we reached escape velocity and headed into New Mexico where we stayed in Silver City for a bit. There we found a charter school named after Aldo Leopold. An odd contrast to the huge copper pit mine that is still the basis for the local economy. Our velocity continued to increase as we targeted reaching Spokane, WA by mid-June.  Yet, in one of the last campgrounds we stayed at, Katie found a loner copy of A Sand County Almanac by Aldo Leopold and we started reading it together.

We had to return the book the next morning, but the message was clear: What I am seeking is not new, but it is very much a minority view.  Seeing it in action in Cascabel was so inspiring, but its minority status was also very apparent there (demonstrated by the continued progress of the SunZia Transmission Line Project through the area under the guise of “renewable energy”).

The big question coming up for Katie and I is: “What now?” In what way do we participate in Cascabel or other communities like it? There are lots of ideas floating around, but it will take us some time to see what finally distills out of this fertile soup. We know a lot more about what we are seeking, but its form has yet to become apparent.  Who knows what the next few months / years will bring.
<< Summer 2017
Winter 2016/2017 >>