Now that Summer is here...oh right, some people reading this are just starting to get a hint of Spring. It is still March, so I guess that is technically true, but the 90-degree temperatures here in Arizona feels a lot more like August to us.

Luckily, our last three months have taken us into the Mojave Desert, through Southeast California (Joshua Tree National Park and the Salton Sea), and into Southern Arizona (Cibola National Wildlife Refuge, Organ Pipe National Monument, Tucson Mountain Park, and Patagonia Lake). The warm days, with occasional freezing temperatures at night, have helped acclimatize us to the weather.

So, for those that are tired of the wind, rain, and snow, here is a bit of what you can look forward to in the coming months. 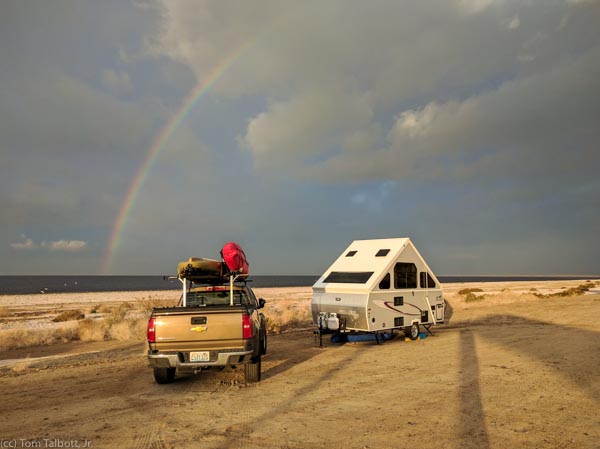 Katie and I have now been out of our house and on the road for over six months. We have stayed in 45 locations and travelled almost 6000 miles in order to reach our current location: Cascabel, AZ. One of the techniques that has been useful in large projects in the past is to do a periodic retrospective to see how things are going and measure whether we are meeting our goals or if the goals have changed.

Back in June, I wrote about our trip and tried to state the goals that we had in pursuing it. Those goals can be summarized as: Our strategies for meeting these goals were: The first step in a retrospective is to list what has gone well. So much has gone well that I’m sure I will miss a lot, but here is a shot: The next step is to list things that haven't gone so well: Finally, what steps can be taken to improve what hasn't gone so well: Well, that wraps up the retrospective. Overall, this trip has been a great success so far. As expected, not everything worked out the way I had imagined, but so much has come out of it that the areas that I called out that need improvement will only make things that much better. I am pleased with the level of preparation that we put into the trip before we left; it has made the transition into living this way quite smooth.

Reminder for the times: